The content below is for users looking for conceptual information about EraSearch RBAC. Follow these links if you're ready to start working with RBAC now:

As of May 2022, EraSearch on EraCloud offers RBAC only for EraCloud-specific features. Future EraCloud versions will support RBAC for all database features. To see what EraCloud RBAC offers now, visit the RBAC in EraCloud section.

The diagram below shows an example of how EraSearch RBAC works in practice.

In this example, there are two actors: a user and an API key. The user has two roles: Admin user and Limited writer. Through those roles, the user has the permissions to manage security across the database and write data to specific indexes.

The API key has one role – Limited writer – which lets the tool or agent using the API key write to specific indexes. 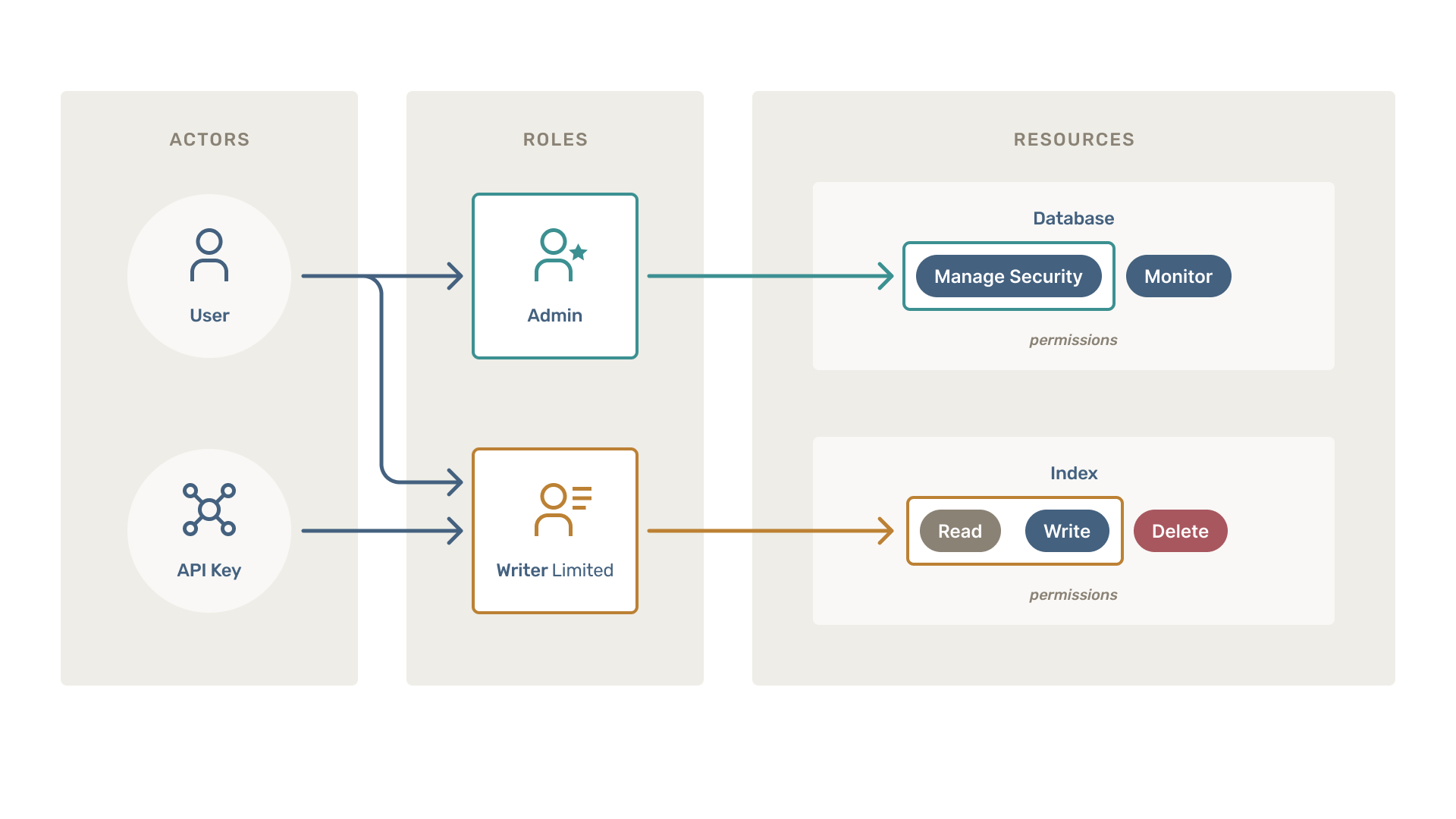 Now that you have a high-level view, here are some more formal definitions of EraSearch's RBAC terms.

There are two kinds of actors in EraSearch: users and API keys. An RBAC user is someone whose identity has been authenticated by a third party. In EraSearch, users can have zero or more roles.

Tools and agents that cannot prove their identity (for example, Telegraf and Logstash) use API keys to work with EraSearch. API keys can have zero or one role.

A permission is something you can do in EraSearch, and it's defined by its resource, action, and scope. EraSearch uses this syntax to express permissions: resource:action:scope.

Scopes are for index resource permissions only, and they limit where actors can do things. For example:

A role has one permission or a set of permissions, and roles are assigned to actors. Users with manage security permissions can create custom roles with one or more permissions.

How permissions map to endpoints¶

The table below lists permissions and how they map to EraSearch's API endpoints:

RBAC in EraCloud lets you manage users, roles, and permissions for EraCloud-specific features. You can use it to do the following:

The current EraCloud version supports RBAC for EraCloud-specific features only. Future versions will support RBAC for the other database features mentioned on this page.

. The Settings page has two tabs for RBAC:

Users can have only one role at a time. If the default roles don't meet your needs and you have the write:org permission, you can create custom roles in Settings > Roles.

The owner role lets users see data in EraCloud's search and alerting features. The role also comes with these permissions:

By default, EraCloud assigns the owner role to the account creator. EraCloud accounts can have several owners, and only owners can:

✔ The admin role gives users nearly all permissions. This role is similar to the owner role.
𝗫 Users with the admin role can't close the EraCloud account or update billing information.

The admin role lets users see data in EraCloud's search and alerting features. The role also comes with these permissions:

The admin role doesn't include these permissions:

Users with the admin role also can't assign roles that include read:billing or write:billing.

The contributor role lets users see data in EraCloud's search and alerting features. The role also comes with this permission:

The contributor role doesn't include these permissions:

The viewer role lets users see data in EraCloud's search and alerting features. The role doesn't include these permissions:

Users with the write:org permission can do the following:

Users can rotate the API key for authenticating with EraSearch.

to start working with RBAC.

If you're using self-hosted EraSearch, visit these guides to set up and start working with RBAC: